One of the best things about custom miniatures is that you can design your hero from the ground up and know that it is your vision of your hero, not someone else's. I wanted to invite our readers and social media friends to post their characters and links to their Hero Forge builds to show off how you've chosen to represent your character with Hero Forge!

One good turn deserves another, so in exchange, Hero Forge co-founder Joshua Bennett has written up a short post about his current charters and show the Hero Forge design I've built to capture him. 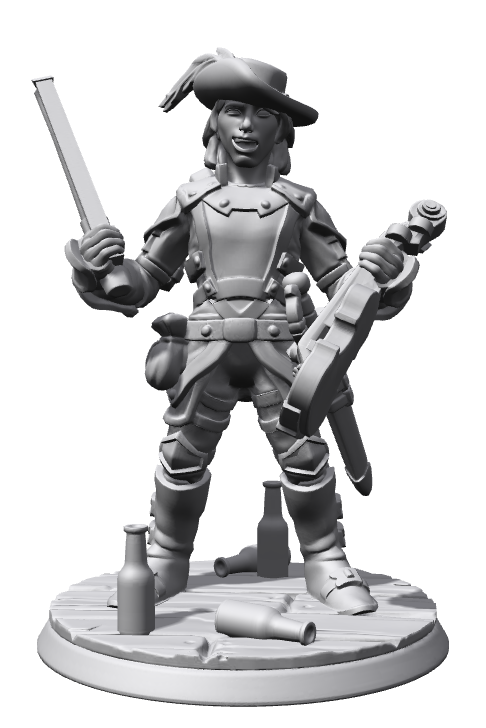 Click the link to load the config on Heroforge.com

Description:
Jack is a young, slight half-elf. He's 5'8" and about 145 pounds. He's handsome, androgynous, has pale skin, silver hair, and gray eyes. He's fabulously vain and, beneath his engraved studded leather, dresses in great finery and patterned silks which he keeps immaculately clean.

He plays flute, lute, and violin, though he typically only carries one with him at a time. He favors the violin. He carries a light crossbow slung across his back and a rapier at his side, though he rarely uses either, preferring to employ his musical magics in combat exclusively. He always wears a large, floppy hat with a white feather stuck in the brim, well-oiled leather boots, and gloves which he's had a tailor convert to a fingerless variety.

He has a large 'entertainer's pack' he carries on the road which has all the necessary equipment for performances of all varieties, including changes of clothes for a variety of situations. It's stuffed to the brim with strange and arcane items he's picked up on the road: magical shoes that force the wearer to dance themselves to death, large crystal spikes meant for holding and transferring multidimensional spirits into corporeal bodies, spider-silk rope, and much more that neither I, nor he, can remember in full.

He comes off as cocky and a drunk, as many great musicians do, but with a sense of profound sadness. His home town, a village once called Fairwater, was destroyed by the fall of a cloud giant's sky palace, Pledged to rebuild it from rubble, he has joined an adventuring guild to amass a fortune.

A lanky, lily-skinned half-elf sits singing across the room from you in the dimly-lit Guild Palantine bar, his feet up on a table. this is something Percy the bartender typically reprimands guildies for, but inexplicably the silver-haired elf gets no guff from the bartender or servers--only smiles and a fresh round as soon as he finishes his previous one. He gently plays an original tune on his lute and does not interrupt his song when they place a fresh tankard by his feet, but smiles warmly at the server from beneath a large swashbuckler's hat.

Many patrons have stopped talking to listen. Jack's impromptu performances have become something of a tradition in Palantine in the past year or so as he is never far from his instruments, nor from the tavern, come nightfall. More heads turn as Jack slowly builds the volume of his song, and Cotton Yeung, one of he oldest guild rangers who is never quiet, slaps one of his bar-mates in the chest to silence him. Jack leans further back in his chair, balancing atop the two rear legs, and despite being clearly, deeply intoxicated, his balance is perfect, showing not so much as a wobble as he plays.

The finery of his clothes is striking, especially considering the dirty fare that road-weary guild rangers typically wear. But inexplicably his engraved, studded leather is polished and oiled to store-window shine, and the crisp, clean silk pants and gambeson beneath are immaculate. The large silver buckles on his fingerless gloves and tall leather boots gleam in the tavern's candlelight. In fact, the indigo Palantine cloak, currently draped across the chair behind him, seems to be the most worn thing about him, its edges lightly singed as though from fire.

His shoulder-length, straight hair spills over the back of the chair and luxuriously waved about like a horse's tail as he shakes his head back and forward while he soulfully sings a melancholy chorus. His voice is honey, dripping with the weight of the epic tale he tells in song.

His lute is hand-painted with elaborate red symbols, though whether they are arcane symbols or simple decoration, you can't be sure. Though it could be mistaken for the glint of candlelight off the light wood, you are nearly certain that the instrument is glowing softly, a feint blue light pulsing with the beat. He fingers move faster and faster, plucking the strings with deft skill.

Then all at once, with heartbreaking sadness in his voice, Jack finishes his song, stopping short of an ending that is as-of-yet unwritten. He stands, suddenly looking very unsteady on his feet, and finishes his last ale with a solemn gulp. The tavern-goers are silent, and one of the barmaids wipes away a tear.

"That's the tale," he slurs, "of Giant's Landing. M'home..." Now that he is not playing, he suddenly he looks like a normal, sad drunk in fancy clothes. He bows deeply to the Tavern, but as he doubles over he fails to rights himself and collapses onto the table before him, sliding to the floor and knocking his rapier, crossbow, and several empty steins to the ground. The barmaid quickly walks over, producing a rag to wipe up the spilled booze and calls for help to get Jack back into his chair.

So, dear reader: who is your hero?