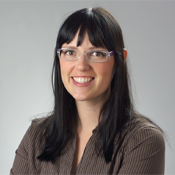 We were lucky enough to get a truly fantastic rigger, Beverly Sage, on board with our project. Currently working for Nickelodeon Animation Studios, her background in character rigging has given her that perfect balance between functionality and artistry. With her help, we’re able to create new poses with wonderful freedom. This is the magic that lets us shape our models into the dynamic poses that make a miniature truly exciting. Small flourishes like rigging a fellow so his biceps will bulge when he bends his arm—those kinds of things make a subtle but notable differences in the final product, and Beverly really nails them.

But of course having something be easily and elegantly poseable is very different than coming up with actual poses. In addition to concept sketches, we've been using real-life reference photos. This, much to my joy, involved a lot of standing around in a parking lot looking silly while holding plastic swords. Snapping heaps of photos and feeding them into some nifty software let us turn these images into (somewhat terrifying) 3D reference models. Here is a pretty weird image of what this process turns out and a corresponding pose we're using in our demo models for the Kickstarter. I'd love to thanks Erika Ishii for bravely allowing herself to be digitized, Tron-style, for our project. 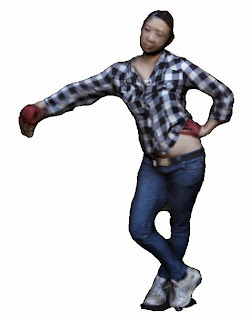 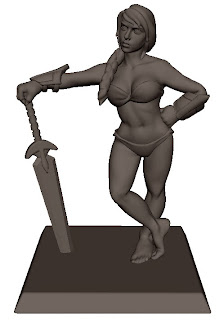 It is remarkably convenient to have a 3D figure to model after, not to mention that it captures realism and verisimilitude. This is yet another example of how our digital process has lot to offer when it comes to offering realism and detail while capturing heroism!

As an aside: we’re planning on one of our pledge levels including the opportunity to submit a pose for our character builder. That way you can feel like you’re a part of people’s gaming all over the world!
Posted by Unknown at 6:29 PM 1 comment:

Digitally sculpting miniatures requires a lot more than just technical skill. One needs a special kind of artistic touch. Miniatures, much like comic books, have their own brand of distorted, medium-specific proportions. This is a result of a number of factors: the need to exaggerate detail to make it readable at a small scale, wanting to be able to easily differentiate between genders and races, and certain ‘legacy’ practices that came from traditional manufacturing techniques (smaller details like hands or fingers are trickier to cast, so you see most miniatures with massive mitts, for example.). If you were to simply shrink a regular sized person down to scale it would look very different than what we've come to expect from minis.

Using 3D printing lets us escape some of these limitations, but we've found that it is still important to consider how our miniatures will look next to the ones people already have. That’s where a eye for style and a lot of carefully weighed stylistic considerations come in. One tiny example of something we've considered: just because we can print miniatures with individual, separate fingers, does that mean we should? Having a sense of how details read when they're shrunk down to roughly 1/70th scale is a skill all on its own. 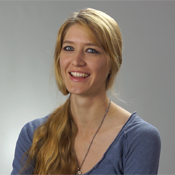 With seven years of professional experience in the 3D modeling and VFX industries, our 3D sculptor Margaret Dost has provided a lot of helpful insight in this respect. She's worked on projects like Pacific Rim, Mortal Kombat vs. DC, and a long list of other movie titles, game cinematics, and commercials. Her expertise has really helped us capture the right balance of detail and flexibility in our models as we've worked to solidify our style, capture the right proportions, and take maximum advantage of the 3D printing medium. I know I've been pleasantly surprised by how quickly we've learned what ‘works’ in mini and what doesn't.

It has been a real thrill to see each new iteration of figures and armor sets. In fact, one of the things I’m most excited to seeing when we successfully fund are the models for other fantasy races. Every artist has a slightly different take on what elves, dwarves, and halflings look like, and based on how awesome the concept art is and how talented our 3D modelers are, I think we’re going to really nail it!

Posted by Unknown at 6:51 PM No comments:

"You've got to be very careful if you don't know where you're going, because you might not get there."
–Yogi Berra

As we embarked on this adventure, we knew our party would need a lot of different character classes to succeed. The very first team members we set out to gather were strong concept artists. We’d decided early on that we wanted to make figures that were at least as inspiring as the minis you could buy elsewhere, so what we needed were artists who could really deliver a heroic, fantastic flavor. Luckily, we didn't have to look far. 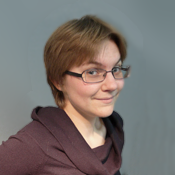 Molly Maloney, currently working as a concept artist for Telltale games, is an old friend of both Teagan and I, and remarkably well suited for the task. Well practiced at making fantastic art with an eye on future digitization, her clean, animated style has offered fantastic guidance as we've worked on translating our 2D concept art into 3D models. 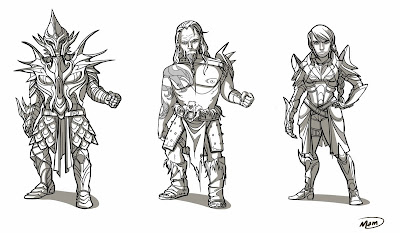 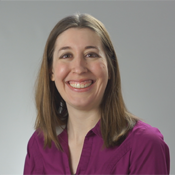 We also found Nicole Cardiff, our second addition, serendipitously close to home. Though she and her husband were longtime friends of ours, it took starting this project for me to actually discover how prolific and talented a freelance fantasy illustrator she is. Nicole’s work has appeared all over the place, including in official Dungeons and Dragons materials for 4th edition, and the recent Tomb of Horrors reboot. She's also appeared on the covers of novels, and on cards for Game of Thrones, Call of Cthulhu, and Warhammer for Fantasy Flight Games and the Everquest Norrath expansion. She clearly had an eye for the classic fantasy look that we knew people would love. 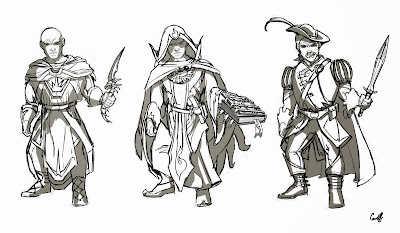 Nicole, truly an art machine, has turned out inspiring designs at a blistering pace!


Both were fantasy and role-playing fans and as soon we explained what we were hoping to do, they jumped on board. Between the two of them, they've turned out some of our favorite armor, weapon, and character designs which we’re hard at work translating into 3D printer compatible models!
Posted by Unknown at 3:57 PM 1 comment:

The idea for customizable miniatures really began rattling around in my brain a little over a year ago when I started a 3.5 edition campaign with some friends. Two of my party members were entirely new to role-playing and, disinclined to invest in their own minis, had been using coins or spare dice to mark their location on the battlefield. As most tabletop gamers know, having and painting your own miniature provides a real sense of investment, and I wanted our new players to have that full experience, that tangible connection to their characters. With the holidays upon our merry band, I decided that I’d try to get everyone a mini as a stocking stuffer.

I figured the most convenient way of getting miniatures that matched up with my friends' characters sheets was to find a website that would let me build the figures myself. After all, I'd seen other apps that had customize-and-3D-print functionality. In my naivete, I sort of took for granted that a service like that would already exist for role-playing games. I thought it would be as simple as ticking a couple boxes, choosing from some cool armor options, and having it shipped to me. As it turned out, no such service existed. 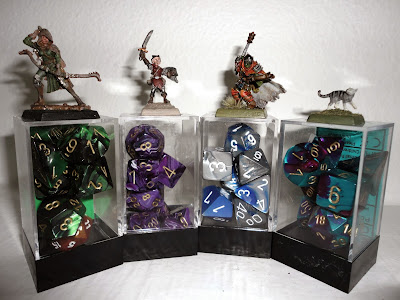 I ended up doing what most tabletop gamers have done at one time or another: settled on minis that were close to, but not quite, what I wanted. I, for example, had built a character  called Harmony Harpbreaker. She was a sassy, lyre-playing, hard-rock inspired gnome bard characterized by smooth-talking and recklessness. In my case, ‘close to what I wanted’ ended up being this mini. And a lovely mini it was. Sure, it was similar enough to what I was looking for to be serviceable, but it just didn't capture the details I cared most about. Harmony would have had her lyre strapped to her back, ready for a quick-draw. She wouldn't have been wearing chain-mail, rather some stylish leather with evidence of the rough-and-tumble lifestyle of a wandering minstrel. And maybe most importantly, she would have had a more relaxed, suave demeanor instead of an aggressive, battle-ready stance.


Now, everyone liked their minis, spent a day painting them, and ended up more attached to their characters than ever. What really amazed me though was how difficult it was to find a figure that truly matched the character sheet and personality of each party member. After Christmas had come and gone, I told my friend Teagan Morrison about my struggle to find the ‘right’ minis and how I wished there were an easy way to build personalized figures. Surprise, surprise: as it turns out, he’d recently been hunting for a way to customize miniatures too, and he'd also failed to find a solution. He'd gone the 'green stuff' route, sawing apart two different minis and Frankensteining parts back together to approximate what he actually wanted. But the idea of customized, 3D printed minis had been germinating in both of us since.

After a conversation that played out like a superhero team-up comic, we decided to join forces, me with my experience working in the RPG community and him with technical experience garnered from his work in the video game industry. We were going to make the very service we wanted to use. We promptly began seeking out other party members to help make this fanciful dream a reality. By our powers combined!
Posted by Unknown at 1:56 PM No comments:

The Beginning of Something New...

In an effort to give a little peek into our product, progress, and process, we wanted to provide an opportunity to see what we’re up to. We thought a blog might also give folks insight into some of what goes into a (hopefully) massively successful Kickstarter campaign. I know I, for one, want a record of it this whole adventure, so: welcome to the Hero Forge Blog!


First off, what are we? 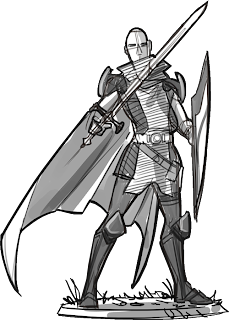 Hero Forge is a service that will let you customize tabletop miniatures in a manner similar to a video game character creator or equipment screen. This will be made possible by a browser-based WebGL UI which will let you see your character in full 3D as you build it. You’ll be able to add, subtract, and mix-and-match parts from our library of poses, weapons, hair styles, accessories, and armor (broken down into several individually switchable parts). I've taken to calling it “digital kit bashing.” When you’re happy with it, checking out will send your model to a 3D printer and get it shipped right to you. Instead of combing through low resolution photo galleries or digging through poorly stocked shelves, you’ll be able to build your character with a few clicks and a get a highly detailed, bespoke mini—what’s not to love?

We’re honestly buzzing with excitement over here: this is a service we’re really excited to provide and one we’re really eager to use ourselves. Hopefully about half a year from now, when you or I start our next campaigns, we’ll be able to build our characters from the ground up on paper AND in plastic!
Posted by Unknown at 5:30 PM No comments: